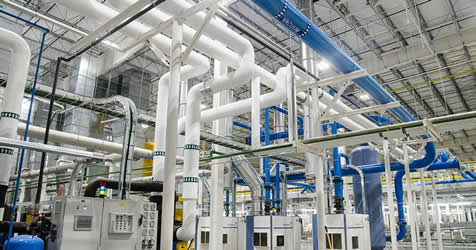 In general, process piping systems carry something other than water. Water may be a component in the system for cooling or as an ingredient. For example, if you have an industrial bread baking machine in a large commercial factory, flour, yeast, water and salt as well as other ingredients are going to be pumped into giant mixing vats. The pipes that transport those ingredients are not considered plumbing pipes. Instead, they are considered part of a process piping system. Another way to think of piping is that whatever is transported through the pipes is used for a specific process that isn’t water distribution, and process piping is generally regulated by engineering code.

Because of its varied uses, there are a variety of ways it can be constructed. We work with you to construct a system that meets your specific needs, which meets health and safety standards. We provide material documentation and traceability for each project.

What is Process Piping? 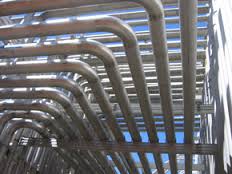 Other components may also be included to facilitate mixing, separating, pressurizing, or other functions. The exact makeup of a process piping system will depend entirely on the application the system serves.

Process piping is commonly found in many industrial settings, including:

In these settings, gases, chemicals, and other liquids all pass through process piping.

While process piping and plumbing share many similarities, the ultimate difference lies with the purpose of the piping system. What system a pipe belongs to can often be determined by examining what the pipe is connected to and where the fluid goes.

Plumbing systems adhere to different codes and regulations, as well as industry standards. In order to be installed and maintained, all plumbing systems require permits, fees, and inspections.

These strict regulations narrow material options for plumbing systems as well, so pipes will typically be made of copper or plastic based on pressure, corrosion factors, and other application requirements.

Plumbing makes up an integral part of a facility’s mechanical systems. The most common uses for plumbing include:

Process piping does not fall under the same regulations as plumbing systems or power piping. This is because process piping is not installed in order to fulfill building services, but instead supports a specific internal operation such as the chemical manufacturing or products or the refinement of petroleum.

Rather than municipal codes, engineering standards govern the design and construction of process piping systems. At many facilities, process piping will fall under American Society of Civil and Mechanical Engineers (ASCME) guidelines. Unlike plumbing, process piping is not a part of a building’s mechanical systems.

That’s not to say that process piping is free from federal oversight. Process piping must also adhere to OSHA standards for safe operation. In addition, some process piping systems may also require initial permitting, inspection, and approval.

Process piping also offers a broader selection for pipe materials. Facilities can choose the best piping material based on intended usage, budget, and the type of fluids being moved. Process piping systems may support a variety of industrial or manufacturing functions, such as: